You are viewing the article: [Updated] Shark attacks in cozumel ! at Outdoor Discovery Just 30 miles long and 10 miles wide, the stunning island of Cozumel offers a wide array of activities and attractions for tourists. This gorgeous little paradise in the Caribbean is simply teeming with marine life.

The tourists from all over the world flock to this beautiful Mexican island for an actual diving-paradise experience. Cozumel does have a reputation for sharks, but to see them in the wild is a dream come true for scuba divers and shark enthusiasts.

Read articles: Naui vs.Padi – What’s the best for you?

Familiar Shark Species You May Encounter in the Cozumel Waters

1) Nurse sharks are the most commonly seen all year round since they’re not much of a migratory species. These bottom-dwellers are slow and generally harmless to humans. But a nurse shark is still a shark with powerful jaws and lots of serrated teeth, plus it can grow up to over 4 meters.

2) Chain catsharks, also known as chain dogfish, are a gorgeous species that glows green. This shark is small, just about 50 centimeters fully grown, and has a unique chain-like pattern of brown or black lines.

3) Whale sharks are the largest shark species. They can grow up to 18 meters. However, they are not known to pose any danger to humans. Just like their cousins, the nurse sharks, whale sharks are slow-moving bottom-dwellers.

4) Tiger sharks, so named for their dark stripes akin to a tiger’s pattern, can grow up to 5 meters. They are ferocious hunters and second only to the great white sharks in recorded fatal human attacks.

5) Hammerhead sharks have also been spotted along the reef. So named for their heads’ hammer-shaped structure, they usually swim in shivers at day but become solitary hunters at night. They have documented attacks on humans without provocation, but no fatalities have been recorded so far.

6) Blacktip reef sharks are known to frequent the Cozumel waters as well. They are timid and tend to stay in shivers. As they prefer to live in shallow waters, they pose a threat to humans and vice-versa because of frequent contact. There have been recorded attacks on humans but no fatalities.

7) Bull sharks are another species that’s drawing a lot of attention in the Cozumel waters. Bull sharks can live in salt and freshwater alike and are regarded as dangerous to humans. They are suspected to be responsible for the majority of near-shore shark attacks. Are There Shark Attacks in Cozumel?

Three fatal attacks on humans by sharks have been recorded in Cozumel.

The first case occurred on June 11th, 1993, when a 42-year-old woman was killed in the Santa Rosa Shallows. Mary Eggemeyer, from Allen, Texas, USA, disappeared during a night dive off Cozumel’s coast. Her body was severely mutilated when found, her both legs cut off at the buttocks area with her left arm missing. There was massive damage to her abdominal cavity as well.

The other two cases of fatal shark attacks happened on August 15th, 1997. Also, the victims were both males from North Carolina, USA. They were Mike Jonaitis, 28, and Mac Lupold, 33. It was reported that the two were killed while diving in Santa Rosa on a record attempt to go down 500 feet.

The victims, according to reports, had probably succumbed to a form of “nitrogen build-up that afflicts divers at great depths,” but Lupold’s body had washed ashore with shark bites.

All three incidents were believed to be tiger shark attacks.

Essential Considerations When Snorkeling or Diving in the Cozumel Waters

You’re lucky if you get to snorkel or dive with sharks, but you know there’s always a risk getting up close and personal with these potential man-eaters. Here’s a list of things to remember when snorkeling or diving in Cozumel:

2) If you’re snorkelling, make sure to go with a buddy because two people look bigger to the sharks. This can somehow scare them back. Stay with your buddy at all times. Stay calm around sharks and do not try to provoke them.

3) More sharks can be spotted while in deep waters than when shore snorkelling. There are boat snorkeling tours in Cozumel that will take you to spots where nurse sharks might be seen. Just make sure no one throws bread to the location where you’re snorkeling to avoid fish swarming around you, as this could overwhelm you.

4) You should also consider that through a swimmer’s or a diver’s mask, things look about 25% or so bigger and closer than they are.

5) Some people say that sharks are generally lazy creatures who won’t be bothered to attack humans for food. They only do so when threatened. So please mind your behavior around these powerful fish. Stay near the seabed or reef wall to keep yourself from getting too exposed.

6) Most shark species found in the Cozumel waters are harmless. Tiger sharks are known to roam the reefs, however, but sightings are rare. Bull sharks are also not unheard of. So please research the environment before taking the plunge.

A trip to Cozumel is a truly fantastic experience, but it’s not complete without seeing a shark (or a shiver or two!) in their natural habitat.

They are splendid creatures to watch and admire and take photos of. It’s a thrilling experience to swim along with them but do so with caution. Take into mind that sharks are strong predators; give them the respect they deserve. 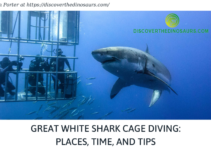